Boundless Loyalty: Julius, a five-year-old American Bully, takes to  paddle boarding alongside his best friend, Elias, who lost most of his vision after fighting in the Iraq War. Elias and Julius participated in wakeboarding, paddle boarding, and sailing together at The Adaptive Adventure Sports Coalitions’ Water Sports Weekend. 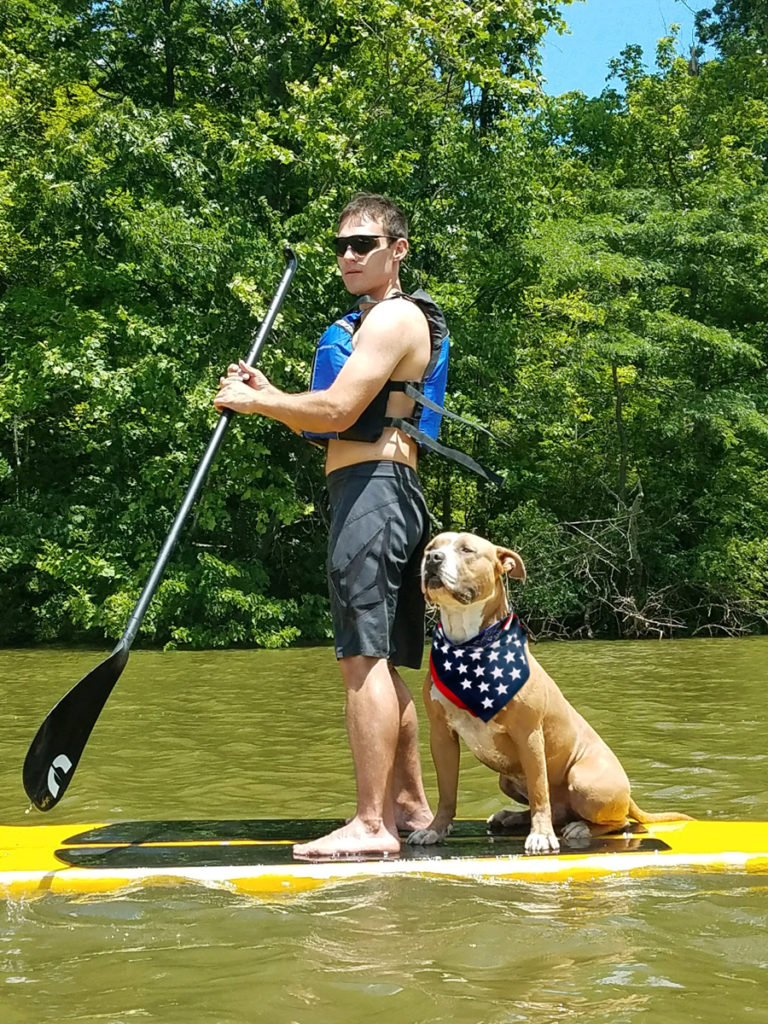 Elias and Julius share a special kind of bond. They arrived at TAASC’s Water Sports Weekend ready to hit the water, and quickly stole the hearts of all the volunteers and participants.

The deep connection between Elias and Julius is an obvious one, composed of equal parts – faithfulness, fierce loyalty, compassion and love. The gregarious dog has become Elias’s new set of eyes…ones that help him to see clearly that it is possible to overcome life’s many obstacles.

Elias, 31, is visually impaired after contracting a bacterial infection while serving in the Army during the Iraq War. He is a young man with a sweet and gentle spirit. But this has not always been the case.

“I grew up in a very destructive home. My Dad beat me. My Mother would cry…all the anger in my heart led me into a world of trouble at school. I would act out, kicking my classmates because of what was happening to me at home – a cycle that began with my Dad’s Dad, who beat and abused my father, who in turn did the same to me.

I thought the best way to channel my rage would be to join the Army, and fight the Iraqi soldiers. During my second deployment, I contracted a bacterial infection in my eyes and was sent home.

I am now legally blind – with only peripheral vision. Angrier than I ever had been before, I turned to drugs to dull the pain, and try to forget about my physical disability and limitations. I got into fights, ended up in jail. And then I found Jesus Christ and my life has completely changed.

I knew I had to channel my energy and the need to get high into something more positive. That’s when I found adaptive sports for people with disabilities. First, I began snowboarding, and then paddle boarding, sailing, wake boarding, and water skiing. Participation in adaptive sports produced a dopamine high, and gave me a positive way to deal with some of the issues in my life. And it was fun!

Five years ago, I decided to move away from the destructive influence of my family to Ohio. I got a dog. And now Julius is my only family. He is my constant companion. I believe God is using Julius to break the destructive patterns, and teach me the meaning of boundless love.

I can’t say enough about the people at TAASC. To be able to participate in adaptive sports has completely changed my life. Faith, Adaptive Sports, and Julius have made all the difference in redirecting the story of my life. My goal now is to continue to help others move forward in a positive way.”

Thanks Elias and Julius for sharing your story and a part of your journey with us! We hope that you come back soon. We have officially adopted Julius as the TAASC mascot. Keep pressing forward.